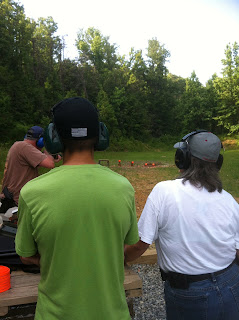 The first "unofficially official" gathering of some Gabriel Possenti Shooters took place on a recent Sunday. After Mass, eight enthusiasts, including blog contributors Padre and Contego, gathered for a fun afternoon of shooting and camaraderie. The group represented a range of shooting experience, and plenty of enthusiasm!

When we arrived at the range we were pleased to find the larger pistol bay free, so we had sufficient room for the group. After a brief safety discussion, everyone went downrange for shooting and individual instruction as needed. We had a variety of guns on hand to shoot and compare. We had two Sig Sauer pistols, a full size P226 and the compact P239, both in 9mm. Also two Kimber .45 ACP 1911s; one in a 5 inch barrel and the other a 4 inch barrel, as well as a Keltec .380. Most of the shooting was done from the 7 yard line. I find that distance to be a good balance, especially for the new shooter. It's far enough to be challenging (and rewarding) but still close enough not to be frustrating. When the Keltec came out we moved up to arms-length distance. We were very conscience of keeping everyone at the same line when shooting, no one backward or forward of another shooter. Folks got to experience some close in shooting with the full size guns as well. Up close and personal targets provide for quite a different "feedback." After we had expended several hundred rounds of ammo it was time to move on to the next event. Everyone helped police the brass and then we packed up the cars to move over to the shotgun range. 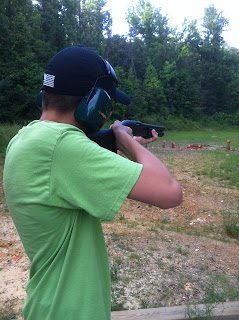 The Remington 870 was the gun of choice here as we had this classic shotgun in three different configurations. We set up some clays at about the 10 yard line and everyone took turns shooting at those. The clays were all hung on the edges of short tree stumps or boards. Again, individual instruction and encouragement was given as needed. Eventually, on one of Padre's trips downrange to set out more clays, he kept going further afield and setting up clays at greater distances. I knew what he had in mind. It was time for some fun "running and gunning." Shoot the first clay, run to where it had been, then shoot the next one out. There were four "stations" total, the last target was set out near the limit of the birdshot shells. Of course, everyone was safe and moved at their own pace. It was fun "play."

Eventually we all agreed we'd had enough and deemed it was time for food! Everyone headed over to our house and the grill was fired up. We enjoyed a fun evening out on the deck with lots of good food and good conversation. The conversation wasn't limited to firearms and personal protection either. Among a group of like-minded Catholics, there's always plenty to talk about. 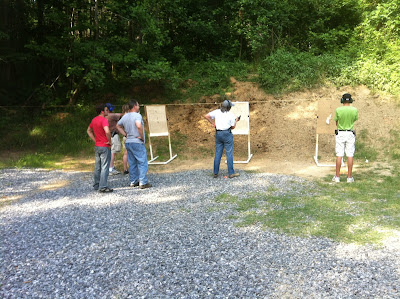 It was an exceptional day and there were smiles all around. I can think of no better way to spend a day than shooting, and eating, with friends.